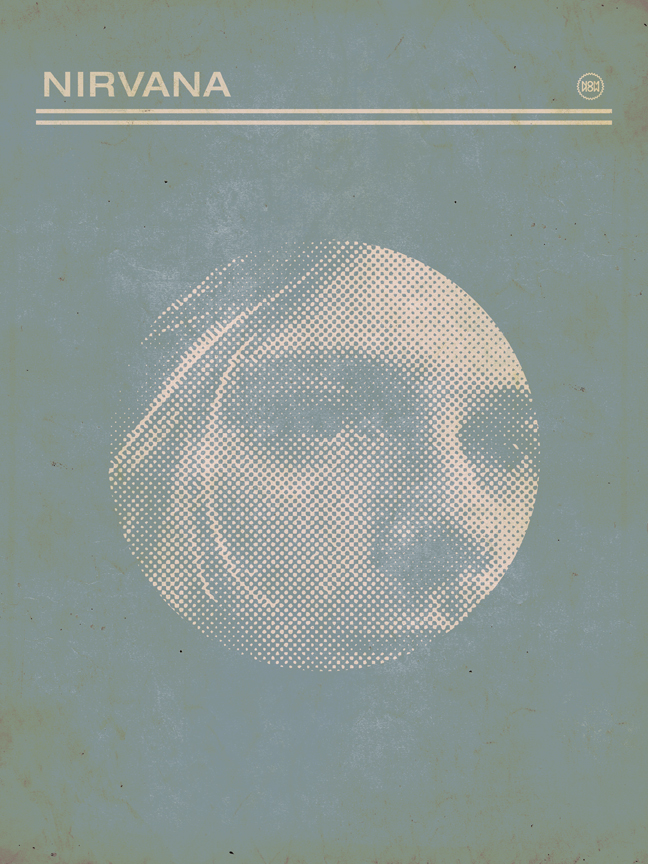 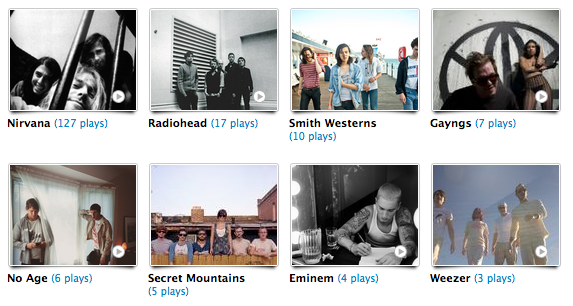 I shamefully admit that up until this week I never listened to Nirvana. I mean, I had heard them obviously, I think Smells Like Teen Spirit put them into a world of forever being known, but I never owned any albums and aside from a few singles, I wasn’t familiar with their discography at all. But after an amazing scene from Six Feet Under in which Nate is listening to All Apologies, which might be the best song ever, I wound up familiarizing myself with all their studio albums and loving it.

This poster is a turn style-wise from the ones I’ve been doing recently, but something didn’t seem right when I tried to brainstorm an iconic or fitting illustration to match the dourness of the band. What makes Nirvana Nirvana? All apologies (pun) to Dave Grohl and Krist Novoselic, but it’s Kurt Cobain. So what better way to represent this band then by using the face of the guy who represents an entire generation? If you’re in the same boat that I was, do yourself a favor and get familiar with this piece of music history. There. Was that cheesy enough for you? 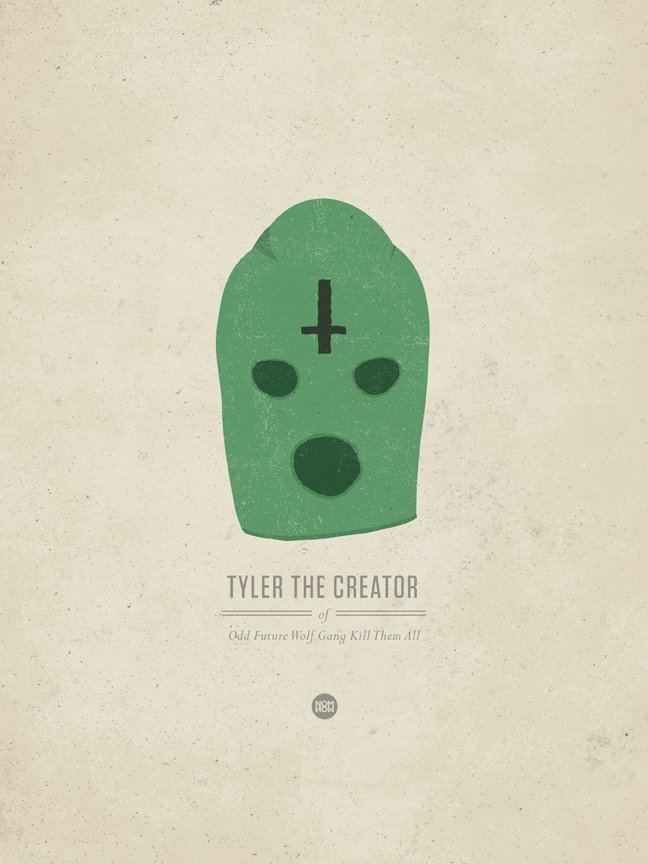 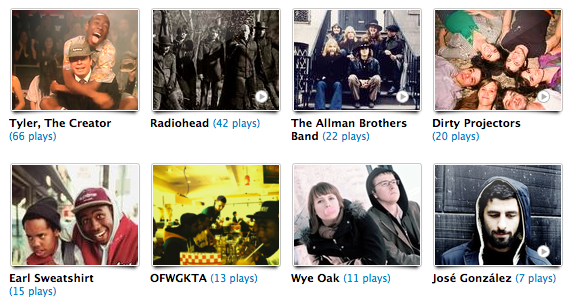 This week I was again all about OFWGKTA but more specifically Tyler The Creator’s album Bastard. If you’re on the internet, I’m sure you’re getting an earful about these guys, but I have to back the masses and say they are quite deserving of any hype they are receiving. I really admire any artist who’s willing to give what they do away. So I wanted to make a poster featuring his now famous green mask, which was shown off to the world when he wore it on Jimmy Fallon, because this has become a staple of his identity as much as the Supreme hats, the tube socks, and floral shirts. Not to lose sight of what hes actually doing, he’s a really good rapper.

Much like everyone else this week I was listening to the new Radiohead album The King Of Limbs. However I’m going to spare you any sort of thoughts I have on it because if you’re anything like me, you can’t decide which you hate more; people glowing over it simply because it’s a new Radiohead album, people bumming out over it because it’s not what they were expecting, or just people talking about it because they feel like they should. I would definitely listen to it and see what you think.

I’d been pretty overdue for a new wallpaper for some time, and just honestly been forgetting to do anything about it. So this afternoon while I had it on my mind I decided to make another Pendleton Blanket wallpaper. This is the Yellowstone blanket from their line of National Parks Blankets. Above is sized appropriately for your computer, and below is sized for the iPhone, should you be that far into the future. I’ve also tacked on the iPhone wallpaper I did for the Glacier Park blanket, because I had only put it on my tumblr. Hope these breathe some life into your devices. 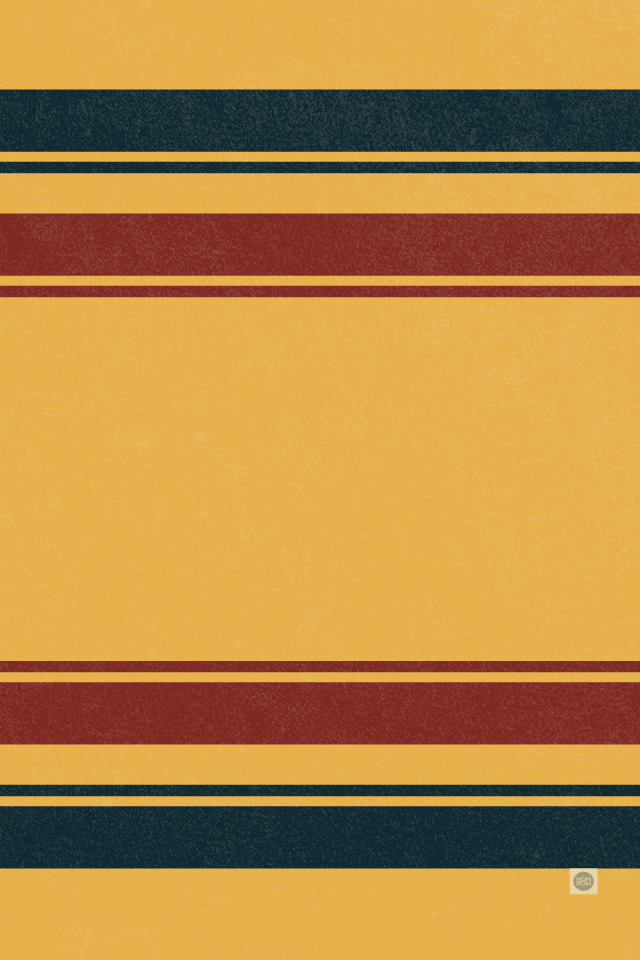 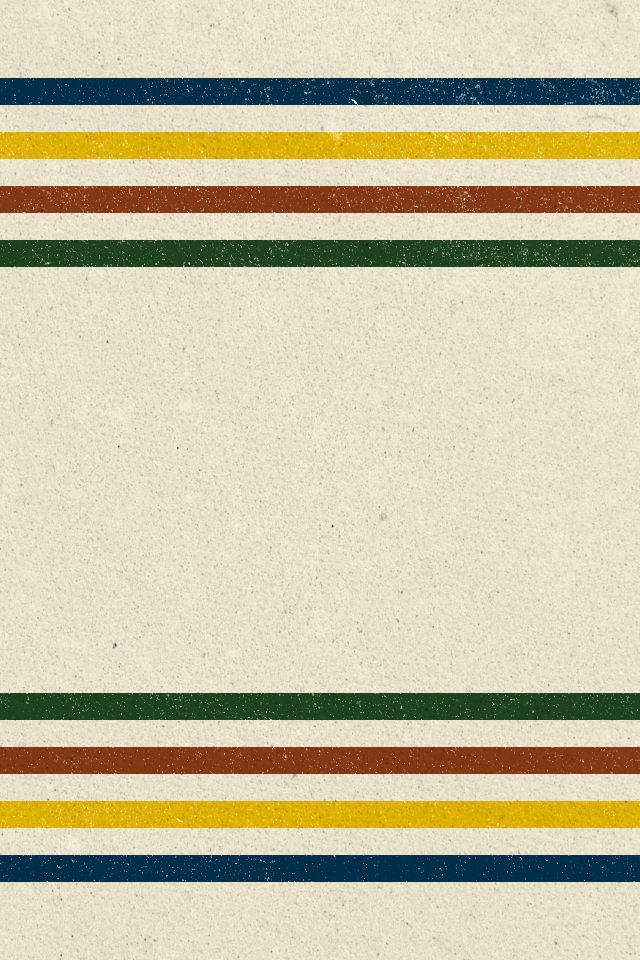 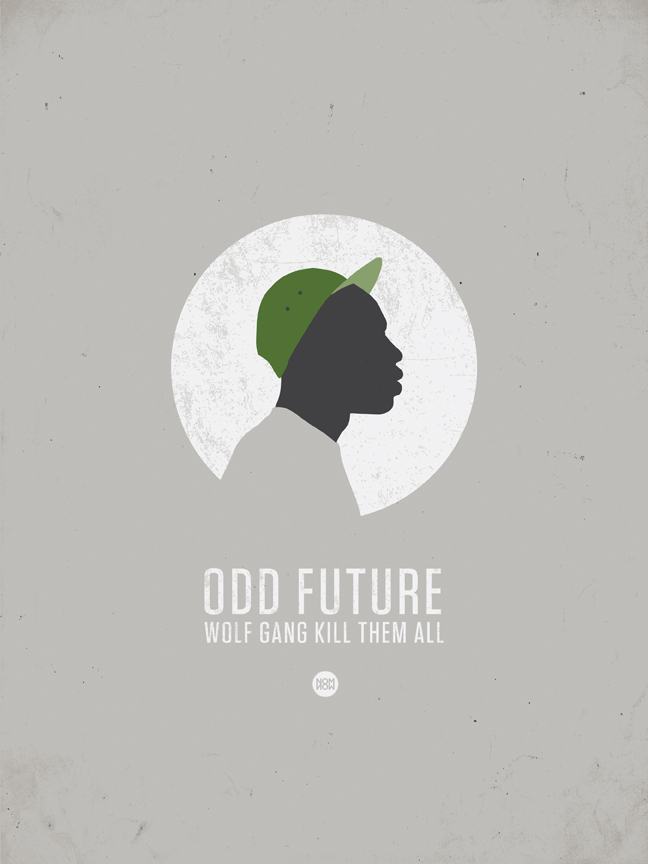 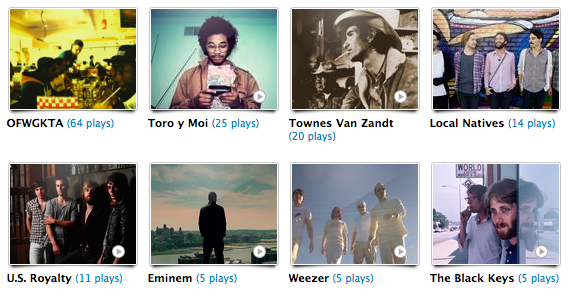 OFWGKTA is one of the most interesting and talented group of musicians making music right now. They make their own beats, they record their own music, they do their own art and promotion, they self release all of their albums and then give them away for free, and they tear everything to shreds. This week a new video was released from ring leader Tyler The Creator, and it’s a really great video. One of the best in the recent years. The whole thing is rather simple but it’s such a great idea and seems to fit everything perfectly. Just watch it. These guys are gonna be on Jimmy Fallon on Wednesday night. If you can stay up that late, reward yourself. If not, you can check the internet the following day, like I’ll be doing. I think everything about these guys is fantastic and they’re going to take the music world for a spin.

Update: Thanks to the powers of tumblr, I just got an email from Julian Berman, friend of OFWGKTA and the photographer of the shot I used to start this illustration. I’d like to point out that Julian was totally cool about this and instead of going all AP vs Shepard Fairey on me, he only asked for some much due credit. This guy is taking all sorts of incredible photos, so check him out.

I got Toro y Moi’s new album this week, something I’d been pining for. Get it? Underneath The Pine. This album is different from the last in the sense that it seems songs were written with the intent of being played with a live band. This is somewhere between Causers Of This and the Daytrotter Session he did. If you liked his other stuff, there’s no reason you won’t like this. 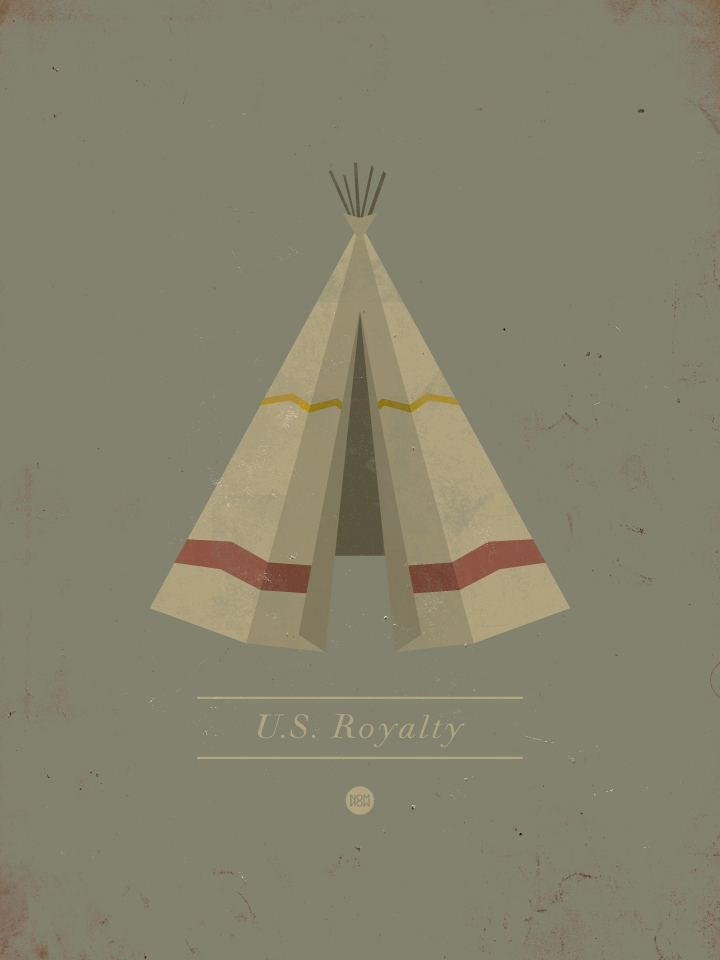 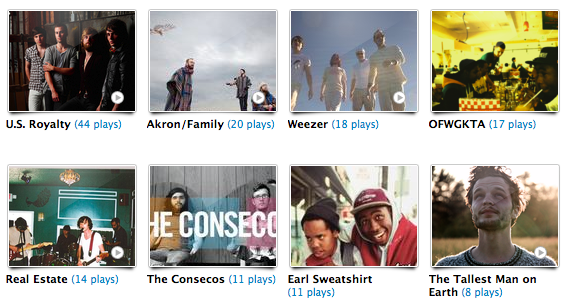 I was turned onto U.S. Royalty by one of my tumblr feeds most famous users, novh. He had talked about them enough that I figured I should give it a chance. It’s somewhere between some kind of dusty Americana and something like Rolling Stones meets Fleet Foxes meets The Cure. I’m not even sure that’s entirely accurate, and I’m sure you could piece together a few probable influences, but it’s all nonetheless impressive. They just self-released their first full length, Mirrors, and it’s no doubt worth giving it a shot. This is definitely a record I’ll be listening to throughout the year. You can sort of hear this music being set to panning shots of old mid western plains, which gave me the idea fore the tepee. Great album art too. 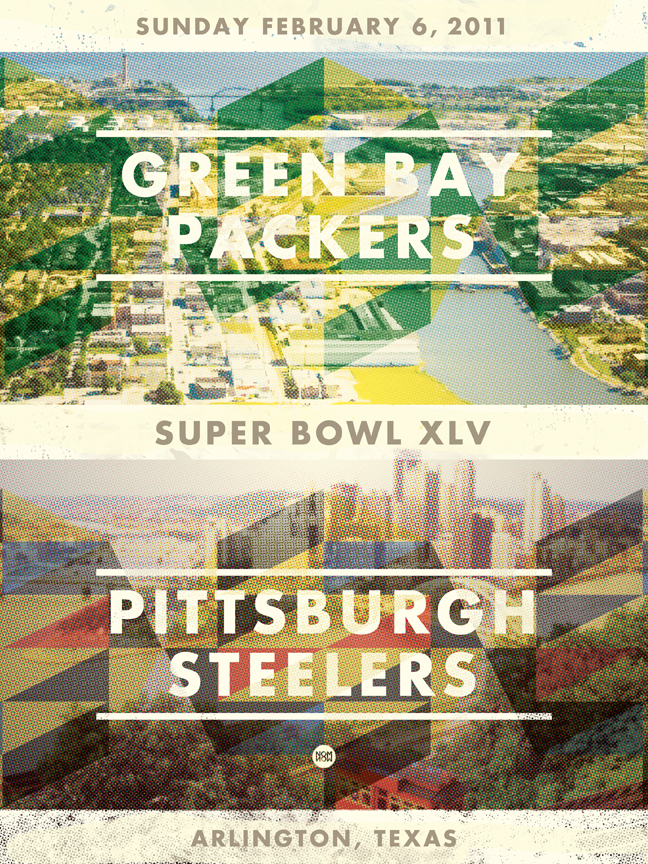 I followed football closer this year than I have any year since 1999. This was in part of joining a fantasy league through my work. It was good to get introduced to a whole bunch of players I’d never heard of, and see which teams got awesome, and which ones became horrible. Oddly enough, I’ve been following the Packers all year because I drafted their QB Aaron Rodgers, and so I usually wound up watching their games every week. He’s one of the most exciting players to watch, and is a really stand out player with a long career ahead of him. On top of really liking Green Bay this year, I’ve never liked the Steelers and so, I’m going Green Bay all the way!

I made this poster mainly because I made one last year, but I figured this could be something I do every year. Even if you don’t like football, it’ always fun to pick a team and watch the Super Bowl with some friends. So go ahead and make that happen.