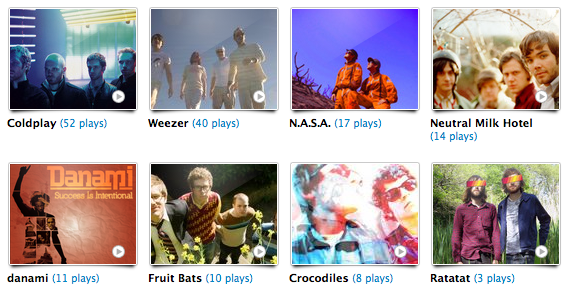 Some may find it a bit corny, but the truth is, Coldplay is just plain good. They are one of the bands of our time who will not only be around for quite a while, but will also be looked  back on fondly. I hadn’t really listened to them in a few years and this weekend I was remembering how much I liked X & Y when that came out. Of all their albums, this is the one that seemed to slip by me the most, though ironically, it is also arguably their best. Talk has one of the greatest guitar lines of the past 10 years and that’s a fact. I guess for all their hype and popularity I still find them to live up to how great they are made to be. I can really respect that.

Speaking of albums I haven’t listened to in years Neutral Milk Hotel’s In The Aeroplane Over The Sea is something I overplayed to the point that I couldn’t dare try to listen to it, but in my nostalgic moments of recent, I had to give it a play. Boy, glad I did.

I met this guy Danami after he tweeted at me on twitter saying he had been following my work for a year. I was both flattered and surprised. I had a few more exchanges with him, and found out that along with being a super nice and positive guy, he was also a rapper. He’s from Detroit and he’s pretty much killing it on all fronts. I just sent him some Nom Now stickers…you know, gotta get that national reach. Check him out for sure. For fans of Lupe, Talib, or Ghostface…. Settin’ In s my JAM.