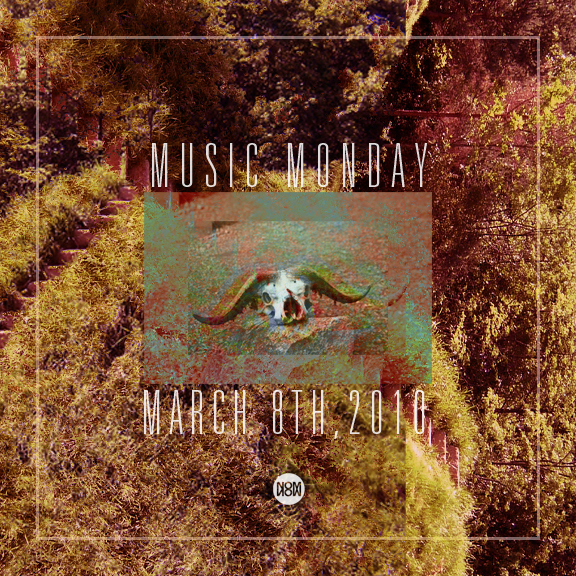 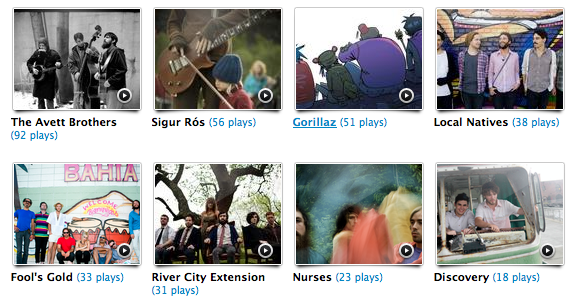 The Avett Brothers have finally made a significant dent in my music listening again. It has been a while, but it finally felt right again, and I went through most of their albums and I was loving it. I guess however, the most significant part of this (at least for me) is that they have surpassed The Beatles as my number one listened to artist of all time, one last.fm. I’m sure the two will teeter back and forth for a while, but The Avetts are on top! I think you all know I love this band, and they are probably my favorite of all time, so this one is a strong recommend.

Next is Sigur Rós. They probably aren’t new to any of you, but I just got so excited thinking about Jónsi’s new album, that I needed to listen to this to wet my whistle for when that comes out. I mean, just watch this.

Gorillaz new album Plastic Beach is certainly the source of these plays…and in fact any plays regarding Gorillaz. I never really listened to them aside from anything that was on TV or the radio, and I was interested enough to give this a shot. To be honest, I really didn’t mind it, and some stuff was particularly good. I have to say, I enjoy the songs that aren’t featuring anyone better than the ones that are, but there are some stand out parts, Mos Def’s songs for sure, that I’d say make this album at least worth a few listens. Also, the more chances I gave it the more I got into it.

Local Natives are still dominating me. Such a good band, and I’m so pissed they canceled their show at Kung Fu Necktie. My wait to see them live continues…

Fool’s Gold I stumbled onto by using the last.fm radio player, and I was glad to see the thing actually played me something I’d never heard, and liked. These guys are in the style of an afro-beat band similar to something like Rubblebucket, but with a zest…the zest being the singing is done in Hebrew. It makes me want to put on my Jim Duncan jersey and daaaaaaance. To start, check out this video.

Nurses is another band that came onto the last.fm radio and I remembered I had seen a video of them playing a song I really liked. So I got a hold of the album, and I still really really love the song I had originally heard, which is called Technicolor, but I don’t really like much else of the album. There’s one or two other decent songs, but the rest is just really not that good. However, I will say that Technicolor is worth your ears.

And finally, Discovery. I had heard a Ra Ra Riot song that I knew I knew, but didn’t know where from. Well, it turns out that it was Discovery who was doing more a less a cover of on their LP. That makes sense since Discovery is one part Ra Ra Riot, and one part Vampire Weekend, two bands I don’t really care for that somehow equals one band I’m moderately interested in.

So that’s how this week panned out, as always, check me out and last.fm.