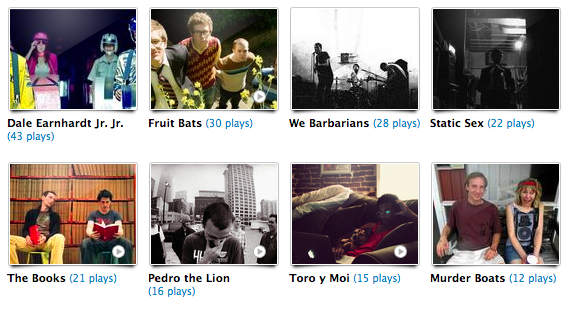 This week I discovered a little band called Dale Earnhardt Jr. Jr. through the extremely awesome website Daytrotter. I was drawn to them because the name made me laugh, and once I listened to them I was pretty much immediately hooked. I’m not entirely sure how to describe them, because some songs are just unbelievable grooves, and some just going to make you smile. They do a cover of The Beach Boys’ song God Only Knows which is a high mountain to climb, and they hike it. Head straight over to download the Daytrotter now.

Because of the obvious connection with the racecar driver by the same name minus one Jr., I wanted to make them their own racing jacket. I was also exploring a lot of new techniques for creating and manipulating textures. This was a very fun piece to make.

Some other highlights this week include Fruit Bats, who have become my summer go-to band, We Barbarians, who came as a recommend from my buddy Biff who caught them with Local Natives. They can best be described as Cold War Kids meets early U2. Definitely check them out.

Static Sex is the project from my buddy Dana Yurcisin, who just released an album called Bedrooms which is all over the internet for free. The whole thing is really great, and highly inventive for a home-recording of that nature. Lots of great songs. For fans of Neutral Milk Hotel or anything Brian McLendon does.

Murder Boats has been described by John Andrews of Wisdom Tooth as the best band in the world. I’m certainly not going to disagree with that. Cannot wait for this full length.